When Alexandria Amadoro was four years old, her parents received a letter from St. Jude Children's Research Hospital. She immediately wanted to know why there was a child on the front of the letter with no hair. When her parents explained to Alexandria what St. Jude does and why the child had no hair, Alexandria began to cry. The child ran into her room, came out with her piggy bank, and handed it to her parents. "Help them," she said.

For most children, that would have ended a sweet story that a family would tell again over the years. But that's not what happened. Since that time, Alexandria has told her parents, “I will help those children.” In the summer of 2017, Alexandria wanted to hike the Continental Divide Trail to raise money and awareness for St. Jude's. The Continental Divide was logistically too difficult for the family from Pennsylvania, so her parents asked her to hike the Appalachian Trail instead.

Now, at this point, it may have occurred to you that the Appalachian Trail is long. I mean, really, really long, like 2,200 miles long. And, from looking at the picture at the top of the article, you've probably realized that Alexandria is just a tiny thing, 9 years old, to be exact. But that didn't stop her and her dad, Eddie, from starting their journey last week, 19 March 2019, to raise money and awareness for St. Jude Children's Research Hospital by completing a thru hike of the Appalachian Trail.

Map of the Appalachian Trail from north Georgia to Maine

The Pennsylvania portion of the AT is very familiar to the Amadoros. For four years they have been helping hikers on the trail. It all started for Eddie at a gas station. He explains, "I met a hiker at a gas station who asked me for a ride. As I learned more about the guy, I discovered he was a veteran who had come back from active duty and was hiking the trail to raise money for a friend who had cancer. After that one trip, I put my phone number up where hikers could find it and started helping them out."

As the years have gone by, Eddie, Amy, and Alexandria have helped many people. Some of those acquaintances have become "tramily," or trail family. One such person is Thomas Wolfe. The Armadoros helped Thomas during his AT hike, and Thomas is now helping Alexandria and Eddie by helping them get acclimated to the trail. "For someone to see the bigger picture at such a young age," Wolfe says of Alexandria, "has had a profound impact on me."

Alexandria and Eddie with their friend Thomas Wolfe

Since Alexandria and her parents made the decision for her to begin her adventure, a great deal has happened. First she came up, all on her own, with a fundraising goal, an ambitious $3.1 million. The family has worked closely with a thru hiker who has helped them get ready and will be supporting them on the trail. Others, individuals and businesses, have gotten into the act such as Cabela's and Canswer Sock Company.

Some of the people who helped outfit Alexandria and her father

Other companies like Alps Mountaineering, Keen, Lotus Foods, Smelly Proof, Vargo, and IWCO Direct also helped her greatly. Local businesses in Hamburg, Pennsylvania, have been big supporters as well. She says, "The whole community has gotten behind me. I've been amazed!"

Alexandria and her parents, Eddie and Amy

In the midst of this story are parents who are raising a remarkable little girl, one that cares deeply for others like the children helped by St. Jude's. Amy Amadoro may be making the biggest sacrifice as she stays behind for most of the trip to teach school but will get to join her family for the summer on the trail. She says, "I am going to miss Alexandria like crazy but I believe in her and what she wants to do, so I will be ok. Those families face greater odds right now and they need Alexandria to do this.”

Amy's attitude and Eddie's eagerness to help Alexandria accomplish her dreams say a great deal about the couple. When asked how they've helped Alexandria become who she's still in the process of becoming, Eddie says, "We've accepted her for who she is, for her individuality. I want to hear her ideas and want her to think for herself. We just try to foster what is within her."

It's easy to forget that this is a nine-year-old girl taking on this epic adventure, but Alexandria is still a little girl who loves to dance, loves to express herself artistically, loves to fish and loves her family's dogs, Pippy and Blitz. Fortunately, she also likes to hike, which she will certainly get plenty of experience doing. 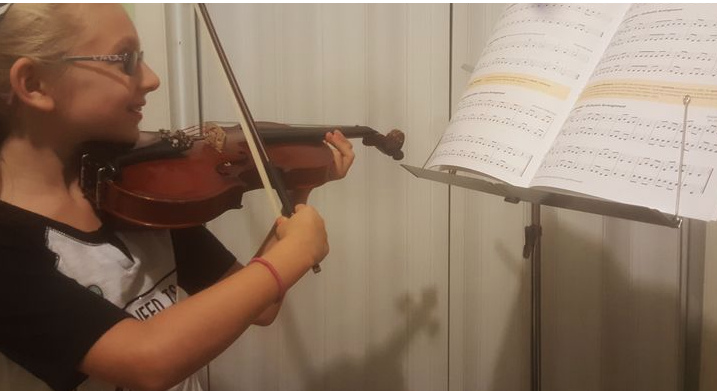 As Alexandria and Eddie take their first steps onto the Appalachian Trail, Alexandria will begin to realize an amazing goal she has had, to help the children and families receiving care at St. Jude.  In regards to this journey Alexandria has said, "Although I do not know them, I love them, I want to do all that I can to help all the sick children."

We closed our interview with Alexandria as she shared, "Whatever you do in the world is going to spread. If you share and practice positivity, it's going spread." I think Alexandria's going to spread a great deal of good in her life.

Postscript: Since we met Alexandria and Eddie last week, their trail adventures have turned out a little differently than they expected. On the first day on the trail, Eddie's knee began to hurt. By the third day, they realized they would have to go home for him to see his doctor. They are back in Pennsylvania now while he recovers but will hit the trail again at Harper's Ferry, Virginia, at the end of April.