Motherhood and Alcohol: A Fresh Path to Changing the “Mommy Needs Wine” Culture

“Time to change the narrative.  Alcohol free is a choice that should not require an explanation, embarrassment or fear of condemnation.”  Celeste Yvonne, TheUltimateMomChallenge.com

“Mommy Drinks Because I Cry,” reads one infant-sized onesie.  “Florida moms celebrate first day of school with wine and donuts,” states a headline for a Florida television station’s news page. A toddler’s t-shirt explains, “I’m the reason mommy drinks wine.”  What was once thought of as a joke has revealed an alarming trend in North America--moms using alcohol to cope with the stresses of motherhood. Celeste Yvonne of @theultimatemomchallenge believes the time has come for moms to take a hard look at their relationships with alcohol.

“At first people thought the ‘Mommy Needs Wine’ culture was funny,” states Yvonne, “but it’s become pervasive and is reflective of a justification of the over-consumption of alcohol.  It’s as if moms say, ‘I’ve had a hard day of parenting, so I need a bottle of wine.’ This is not the type of support we need to offer people; we need to offer real support to help people who are struggling with parenting.  We need to change the narrative.”

Celeste Yvonne understands the perception of comfort that alcohol seems to provide even for someone who has seen the dangers of alcohol addiction first hand.  The mother of two young children and a marketing professional from Reno, Nevada, says, “My dad, who was an alcoholic, had a severe stroke when I was 15. I was so angry with him because I blamed his stroke on his drinking. I was also dealing with tons of guilt because I had been caught for shoplifting earlier in the week, so I felt that that stress had also contributed to his stroke.”

Celeste went through high school feeling that she was “stronger than alcohol” and only binge drank on a limited basis in college.

“I thought I could outsmart alcoholism by setting rules to avoid becoming like my dad.  I didn’t drink hard alcohol and didn’t drink during the day because that’s what my dad had done,” she explains.

After college, however, Celeste’s drinking slowly began to build. Though she was able to quit drinking during both of her pregnancies, her dependence on alcohol intensified after she became a mom.

“I was so overwhelmed and out of control that it felt like wine was all I had; more nights than not I would finish a bottle of wine by the end of the night.  I tried not to drink in front of the kids, but often found myself parenting while suffering from a hangover, which made me grumpy and less patient.” 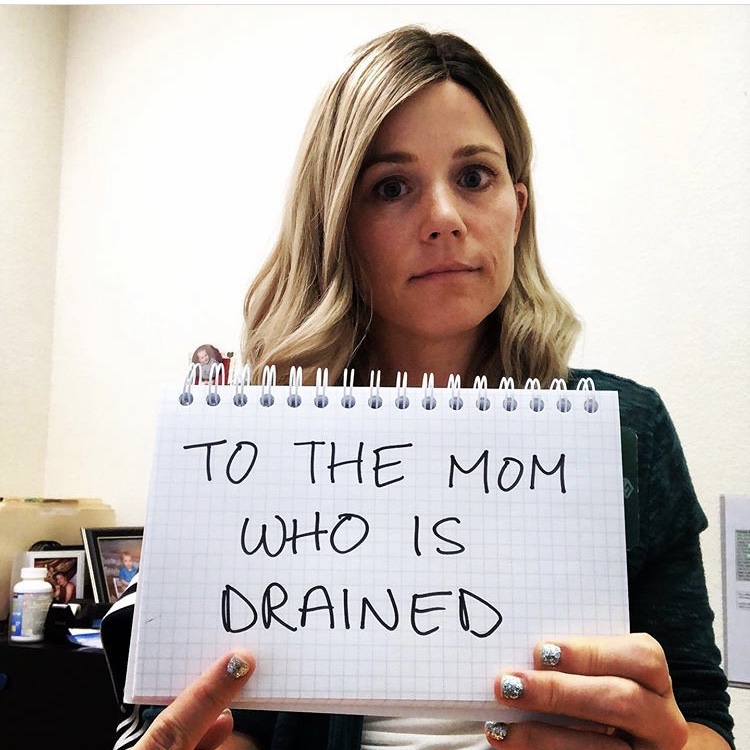 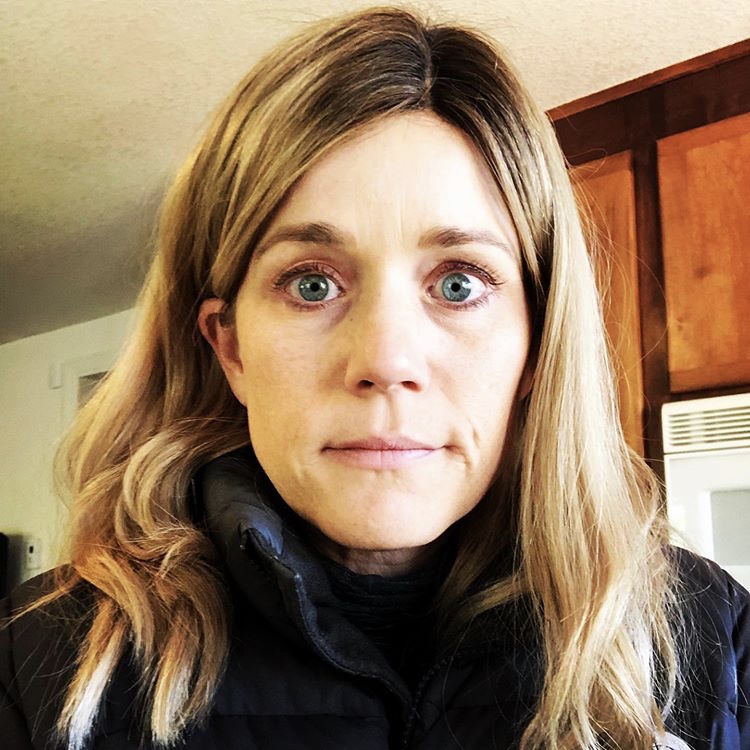 Even though Celeste tried to hide her addiction from others, she knew that change was necessary.  “I was very discreet because I didn’t want anyone to know how much I was drinking, but one night I was sitting on the couch with my three year old.  I had finished a glass of wine and was getting up to get another drink when he asked me why I needed another drink. I realized that he was going to remember me drinking throughout his childhood like I remembered my childhood with my father drinking.   I knew I had to change or I could end up like my dad.”

The need for change reached a crisis point in December of 2017.  Celeste had been attending many business Christmas parties and drank heavily at all of them.  On Monday, December 18, she was at work when she began having trouble breathing.

“I thought I was having a stroke just like my dad.  I drove myself to the emergency room, checked myself in, and called my mom.  When Mom got to the hospital, I told her that I thought I was an alcoholic.”

This admission was life changing.  “It was such an impactful thing to say out loud,” she states, “and I knew my mom would hold me accountable.”

She told her husband of her realization later in the day and thus began her journey into sobriety that has lasted 22 months so far.  After about the first 90 days, she realized she was already in a much better place.

“There was a huge peace and a weight was lifted.  It quieted the chatter in my head of wondering when and where I would have my next drink.  It was amazing how much time you get back. With a three year old and five year old, I want to be present.  I don’t want to not be living in the present.” 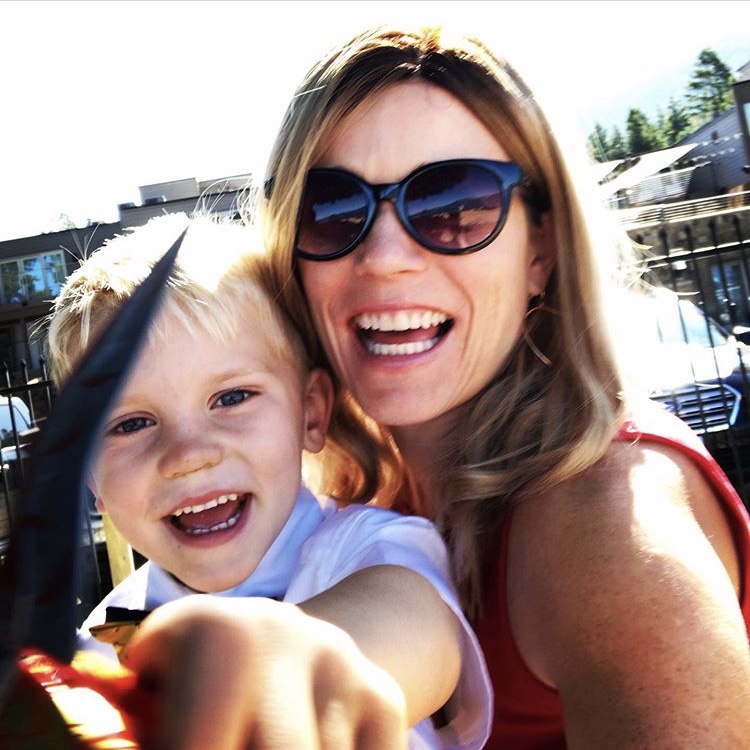 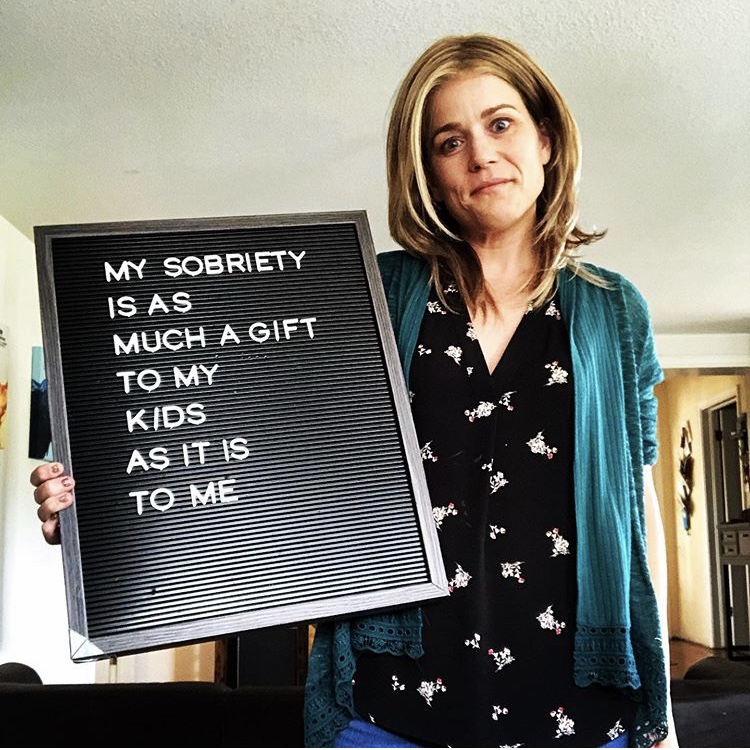 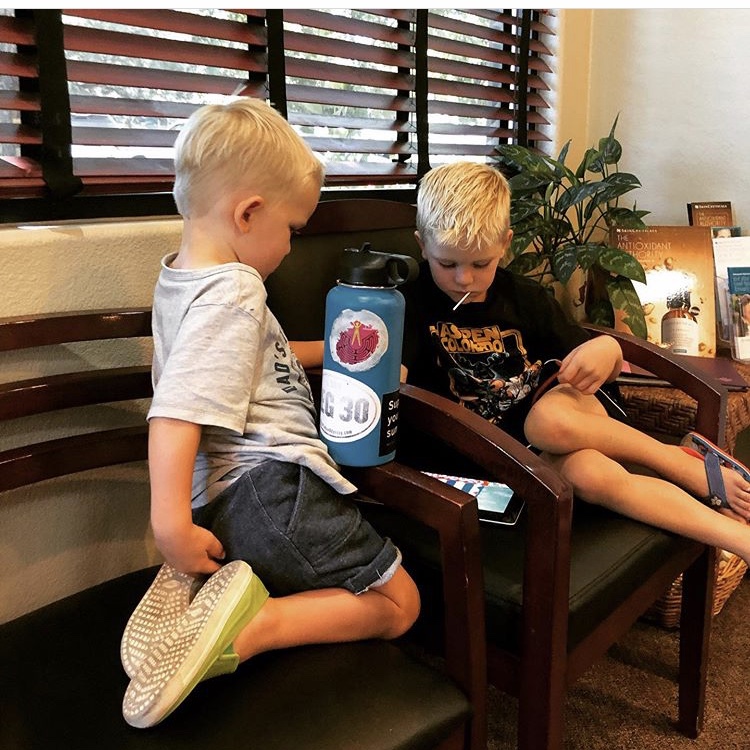 With the benefits of being sober comes some challenges.  For Celeste, socialization has been a challenge because she is often surrounded by people who are drinking and finds herself having to say, “No, I don’t drink anymore.”  On her Instagram page she says, “Being alcohol free can truly feel ostracizing. And it’s strange to think that alcohol is the only drug that we have to explain NOT using.”

In addition to experiencing social pressure, Celeste has also realized how much she used alcohol to numb her pain.

“We lost my dad a couple of months ago, 25 years after his stroke.  Processing those feelings without alcohol was a raw experience. I realized, however, if I can’t reflect on my father while sober, what does that say to my dad?  Staying sober is a great way to honor him.”

Another thing Celeste realized is how alcohol had infiltrated every aspect of her life.  “It was part of everything I did, everything I agreed to do. I was always wondering where I would get my next drink and if an event would have enough alcohol.  It was hard to enjoy anything and truly be present. I was always worried about the next drink and it robbed me of so much joy.”

Celeste’s story is not unique.  The National Institute on Alcohol Abuse and Alcoholism reports an 83.7% increase in female alcohol use disorder in the United States between 2002 and 2013.  Also, high-risk drinking, defined as more than three drinks in a day or seven in a week for women, is on the rise by about 58%, according to a 2017 study comparing drinking habits from 2001-2002 and 2012-2013.

And though the statistics show that many women struggle with their relationship with alcohol, according to Celeste, many struggle to admit that it is damaging to them because they don’t themselves as alcoholics.  “I didn’t stop drinking because I hadn’t hit ‘rock bottom.’ I wasn’t a ‘stereotypical alcoholic,’ so I didn’t feel like I was really an alcoholic.”

Celeste feels that many people could echo these feelings because they  don’t fit the stereotypes, but that doesn’t mean they don’t have a problem with alcohol.

“We have to step away from the label and take a closer look at our relationship with alcohol.  I had to realize that alcohol wasn’t serving me. In fact, it was a toxic relationship that had to change.”

Her advice for those who are reading this story and think, “Yes, that’s me,” is to realize that, like alcoholism can look different for different people, recovery is unique for each person.

“When someone asks me for advice, I always tell them three things: get the book This Naked Mind by Annie Grace.  Then, sign up for the The Alcohol Experiment: A 30-day, Alcohol-Free Challenge to Interrupt Your Habits and Help You Take Control, also by Grace.  The third step is to get an accountability partner.  For me, that was my mom. I knew that she would be extremely supportive and nonjudgemental.  My mom had also watched her husband [my dad] go through alcoholism and could say, with authority, ‘We’re going to get through this.’”

The change in narrative around the “Mommy Drinking” issue is making a difference, but there are still many more people who need to come to grips with their damaging relationships with alcohol.  As Celeste says on her Instagram site, “You never regret a day you don’t drink.”